Note, due to some camera issues, some jittering effects may occur in certain parts of the game. Discretion is advised.

This is the Tiny Demo, consisting of the title screen, main menu, and Tutorial 1. To help us improve the game, we encourage you to report bugs and issues using the F1 menu, as this sends the data directly to the team. Feel free to use this for things you like about the game, too! It helps to know what we're doing right as well as what we're doing wrong.

The MacOS version is not signed, so you should run this command to fix it:

The Linux version is not marked as executable, so you should run this Bash command to fix it:

This was really fun to play through, despite how short the demo was.

It made me think about the remake for SM63 I always envisioned in my mind as a kid, and not to mention this demo ambushed me with nostalgia.

This is looking really great so far! I hope to one day see the full version, whenever it's ready. 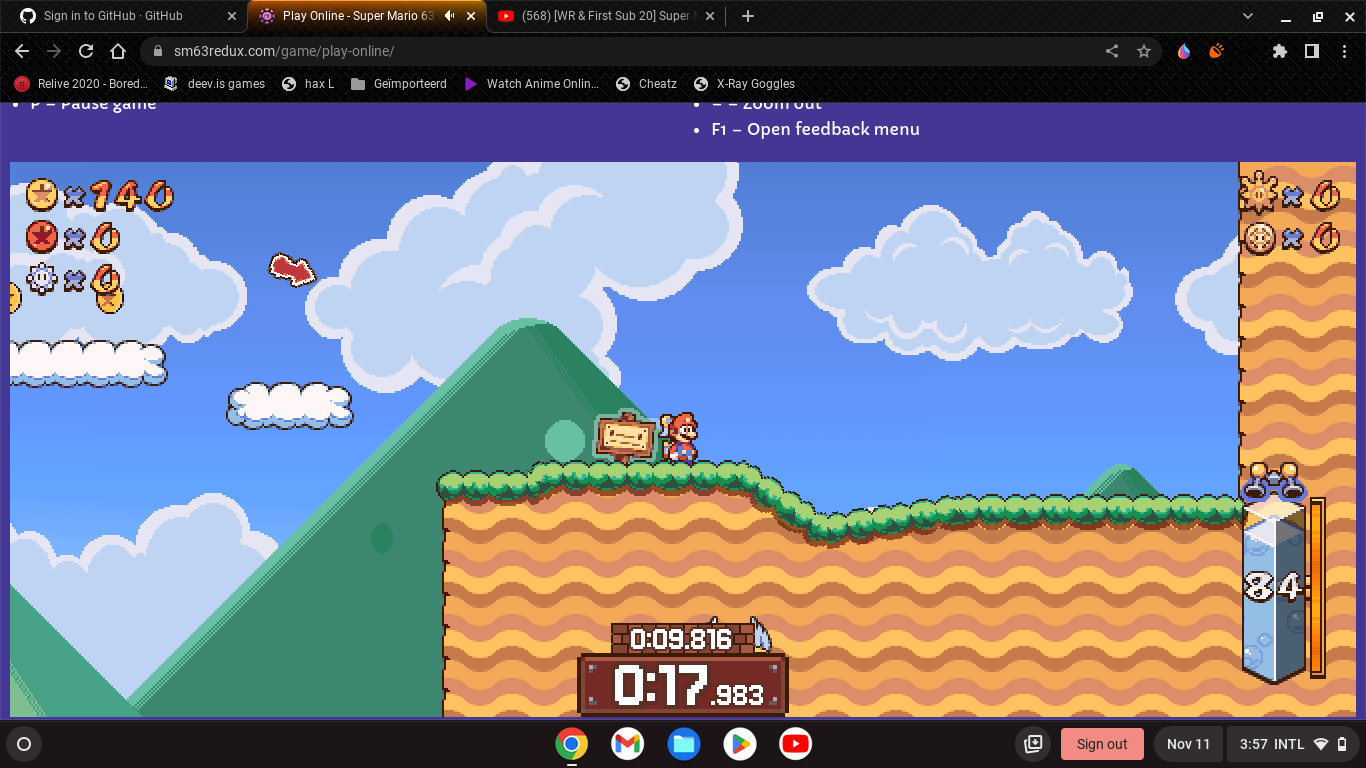 the game just has a black screen on my phone

Reply
a mario fan13 days ago

same but i'm on laptop

How old is your laptop?

Reply
a mario fan4 days ago

some years old (i don't remember)

Could you give some information about your phone? What model is it? How old is it?

very fun, reminds me of when I'd play bootleg mario world games on random websites in like 2007 (but this has better controls obv)

the android controls are so big i cant play

We're working on fixing that for the next version.

I remember playing the original Mario 63 way back in fifth grade or something like that, I remember playing it with my friends trying to see who can beat the game first (we never beat it but it was still fun).

This just... wow. This is absolutely phenominal, I like not being able to dash, and for some reason I couldn't get F.L.U.D.D. to work, even after I refilled it, which was weird, but for what I played, you didn't need F.L.U.D.D.

Also the music I can't remember if it's remixed or if this is what is in the original. Seeing as though flash died, I can't exactly just pull up the game.

Props to you creator!

I'm not a big fan of the controls.  For me, its really inconvenient having to use the up arrow as a jump button. It would make more sense to map the jump button to the Z button, and Ground Pound to the Down Arrow

The controls are how they were in the original. You'll be able to rebind them in the future.

Reply
Dreaming of Light82 days ago(+1)

this was absolutely amazing, I can't wait to have my mom play it

i don't think the speedrun controls should be enabled by default, because i accidentally pressed "A" and it took me to the very beginning. i thought my game crashed because i got a bad laptop. i was trying to pause the game but found out that the pause button is not enter, but "P". i guess it's a little nit picky, but also, when you rapidly mash left and right, mario doesn't do a midair spin, and in the original, it was just like pressing "X", but you fell slower to the ground. also, when i go to the next area, the music just gets messed up by repeatedly looping like 1 second of what was previously playing. I don't think this happens in more powerful devices, but i thought i should point that out. the game needs more optimization.

mario runs too fast, when in the original game, he walked a little slower, but double-tapping any horizontal direction made him run fast

The speedrun controls were a last-minute addition, so they're a bit rough, yeah.

The pause button is P because that's how it was in the original.

The fastspin was removed because it's not useful enough anywhere in the game.

The music stuttering is due to the limitations of the Web platform - not the game's optimization, nor your computer. It won't happen on the downloaded version. It might be fixed when we add a custom loading system, but maybe not.

Mario's running speed is the same as the original, I'm pretty sure. The higher framerate makes the whole game feel faster. We removed dashing because it's less useful than diving, and makes precise movement harder.

oh i see, sorry for the late response

Reply
a mario fan102 days ago

the game won't even start

What platform are you on?

Reply
a mario fan92 days ago

Weird. Where do you get to? Is it a black screen, or what?

Reply
a mario fan83 days ago

the game opens, plays the title screen music but it just stays put in a black screen and does literally nothing

No idea what's wrong, then. Sorry.

its hard to control on web but is way better installed, great game

good luck on finishing the game

That's odd, not quite sure why it would be hard to control on web. Are you playing on desktop or phone?

its just becaues the games slower for me on web (my laptop suck, it its not available to handle

We probably won't be adding dashing or fast-spinning, and Luigi won't come until much later, but, I'm glad you like it!

THIS IS SOO FUN looking forward to final!

Will it have new levels/features not present in the original game?

New levels are sorta planned, but not confirmed. We'll probably be using the Level Designer to build future levels, which should be easier.

Looks stunning! Can’t wait to see more of it.

I have a small quality-of-life suggestion for Android: allow reversed landscape rotation. Some controllers (ones wrapping sides of the phone like Gamesir X2) work well with that orientation only.

Huh, I didn't know that wasn't already possible. I'll see what I can do.

this tiny demo uses the control scheme from the original flash game, which i realized could be simplified:

So cool! I was never able to play the original, but I only heard good stuff about it so to be able to play it like this is so cool! Let's just hope Nintendo doesn't take it down.

You can play the original using the .exe found on Runouw.com, or by using a Flash Projector.

Yay, thank you so much!

So. For mobile, can you make the on screen controls editable? Not a fan of the movement on the right hand and the buttons being so big. Other than that, pretty solid.

Editable controls are planned. It's like that as the default for accessibility purposes, but we'll try to make it customisable. Glad you enjoyed it

Great Game/Demo, it was a lot of fun, would like to see if you could Incorporate the WASD keys to into movement.  Can't wait to see what you do next!!

Good Work, i hope Nintendo don't take is project down.

This game should be on nintendo!

I don't play super Mario but this got my attention and I'm good at it-
nice game btw :D

Trying to install on Linux, I got the following message:

This title is hosted on an incompatible third-party website

Try the following Bash command in the game directory:

If that doesn't work, try contacting me elsewhere and I might be able to lend a hand.

So, that works, that’s how I’m running the game.

What I’m saying is that I cannot use the Itch app to install and manage it because of this bug – which is quite simple to fix, but it must be done before zipping the package.

The Itch app manages game installations and updates, but if the game executable is not executable on the current architecture, the app refuses to install (or update) the game.

So, before you make the ZIP package, you need to set the file executable flag, only after that, you can put it in the ZIP file.

This is precisely the chmod +x redux.x86_64 you mention, but before zipping the package.

Ahh, of course, that makes sense. I should be able to do that easily for next release. Thank you!

I'm really liking this so far! I hope you build more of it, the original mario 63 was really good and this is the same thing but with better graphics! I like it and hope you keep going.

I was just revisiting the original a while back. this is a pleasant surprise.

The game is a remake, we are remaking the graphics in a new style. If you want the graphics to more closely match the original, I suggest a texture mod once the game is released fully.

Tried Speedrunning The Demo Got a 1:16 On fluddless 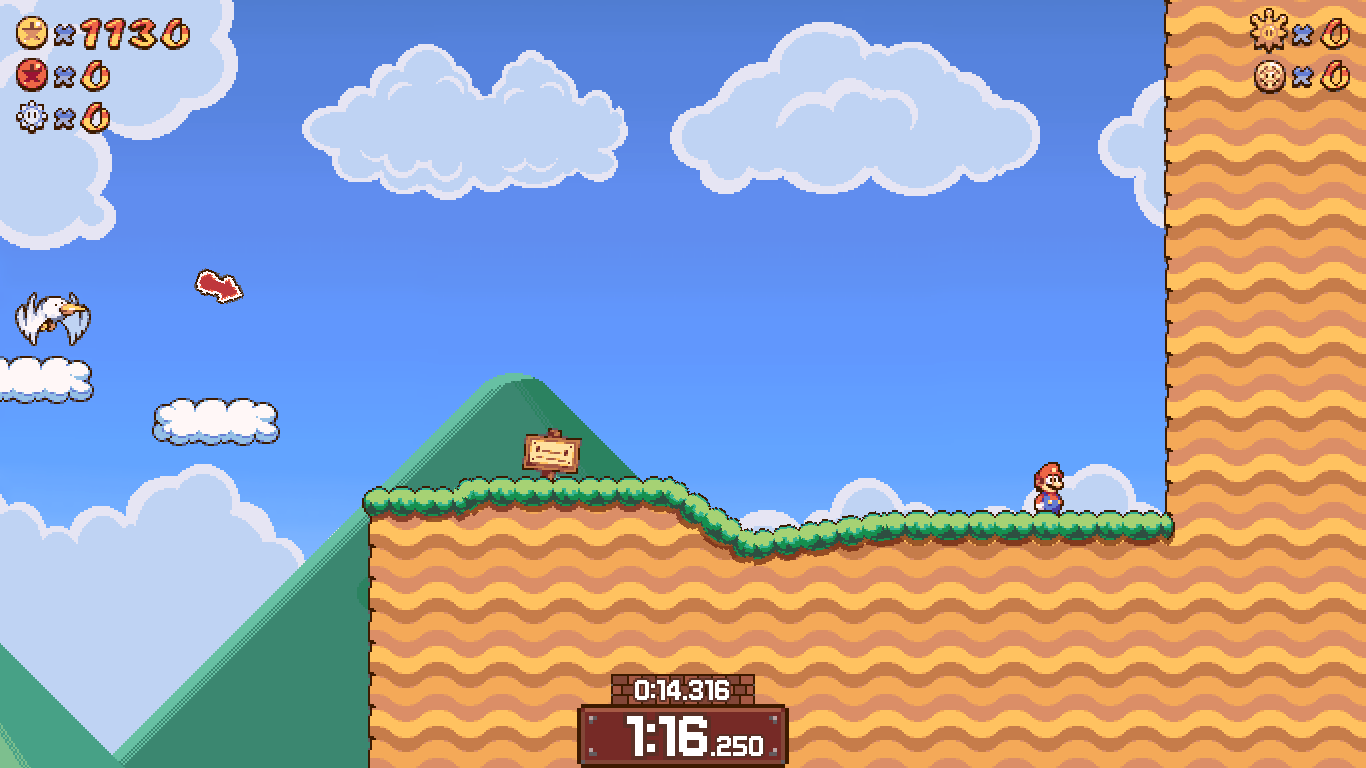 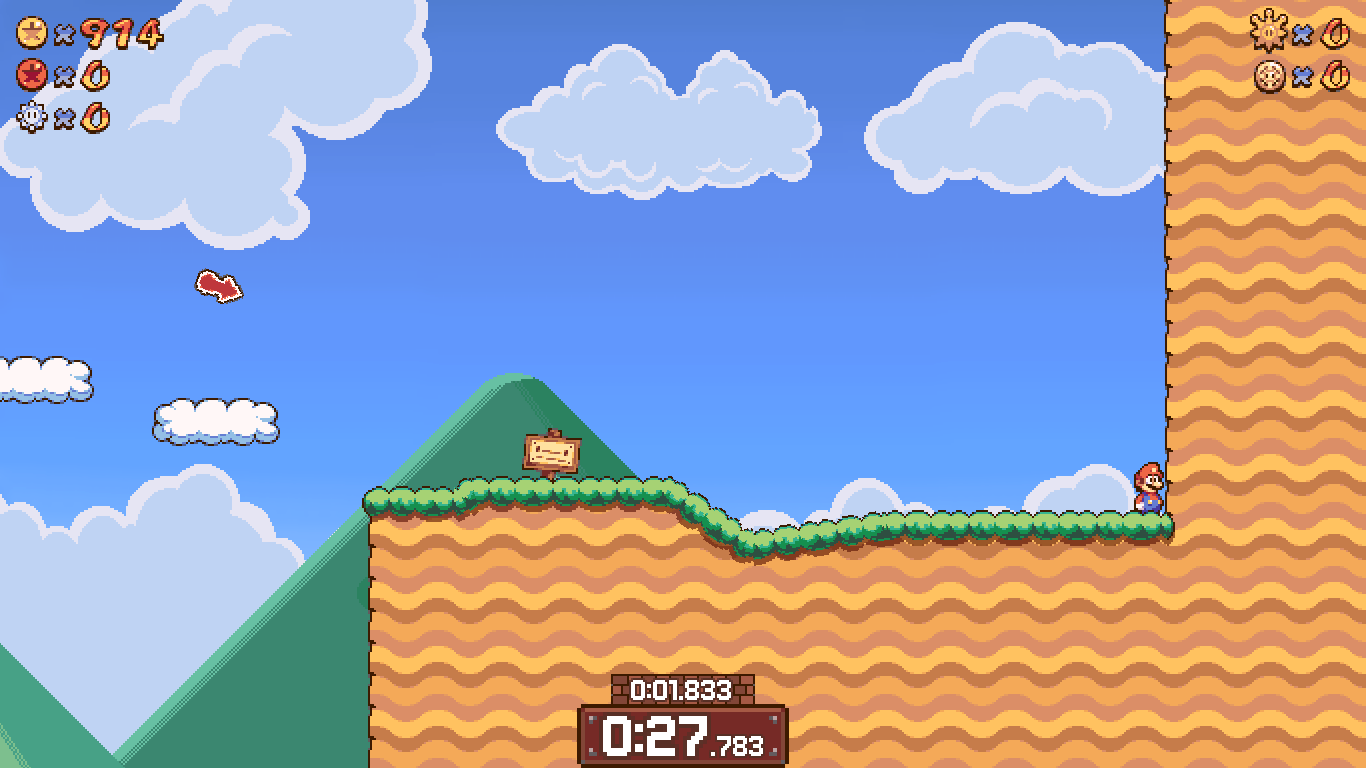 great demo so far! really gave me the feel of playing mario 63 for the first time again.

also love the music and how accurate the tutorial was!

i cant play the game, whenever i press the "run game" button, it ends up saying "WebGL not available"

Your device/browser likely doesn't support some of the features we need to run the game. What operating system are you using? And, what browser are you using?

The game is great, it feels like i'm playing real game. Keep it up.

My only problem on Mobile is the controls are not comfy at all.

It suppose the movement will be on the left and the jump on the right and buttons.

My bad, my controller wasnt connecting so I thought it didnt have it. Amazing game so far.

another feature was enemies getting knocked down by water, but I imagine that would be hard to implement, as the change from a sprite to a particle...

This is a little picky, but the icon on fludd is supposed to be Prof. E. Gadd. 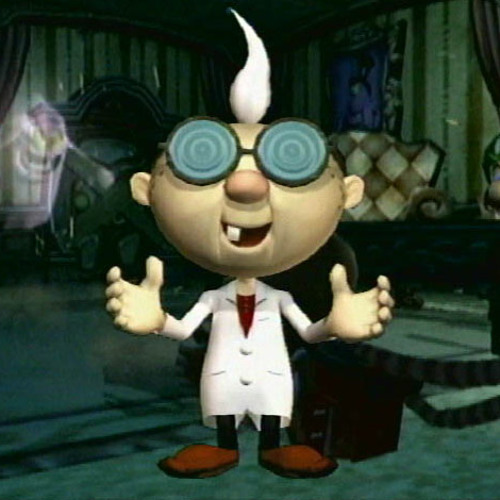 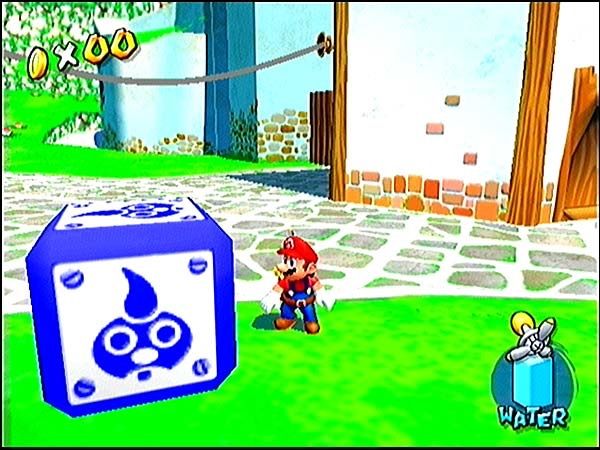 Please add much slower falling when repeatedly pressing <- and -> to spin 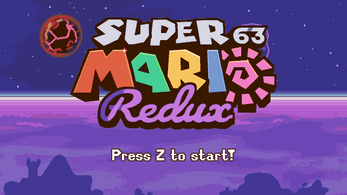 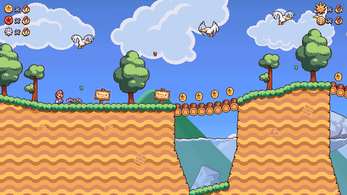 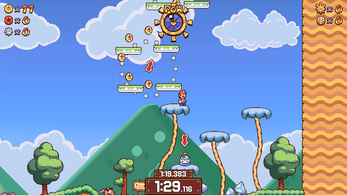 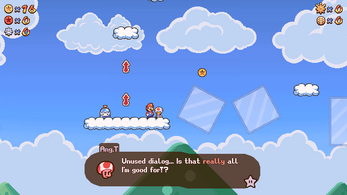 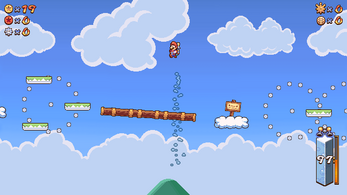